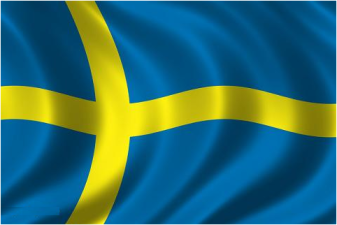 The Swedish flag was adopted on June 22, 1906.  The flag contains a blue field with a yellow Scandinavian cross.  The flag is modelled on the Danish flag and the colours are believed to have been taken from the Coat of Arms of Sweden of 1442.  The colours have been used to represent Sweden since King Magnus Birgersson`s royal coat of arms of 1275.