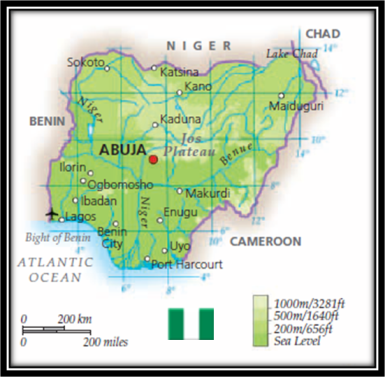 West Africa’s biggest nation, Nigeria is a federation of 36 states and the capital, Abuja. Dominated by military governments since 1966, democracy returned in 1999.

Geography: Coastal area of beaches, swamps, and lagoons gives way to rain-forest, and then to savanna on the high plateaus. Semi-desert to the north.

Climate: The south is hot, rainy and humid for most of the year. The arid north has one very humid wet season. The Jos Plateau and highlands are cooler.

People and Society; Some 250 ethnic groups: tensions threaten national unity, with sporadic inter-communal violence. The northern states have introduced sharia (Islamic law) for their majority Muslim populations. Women have more economic independence in the south. In the Niger Delta, where 70% of people live on less than a dollar a day, militants are fighting for a share of the benefits of the region’s oil wealth.

Insight: Nigeria is Africa’s most populous state – one in every seven Africans is Nigerian