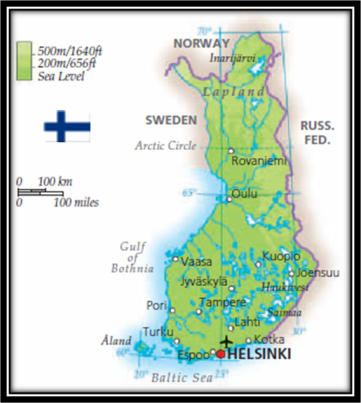 Finland’s language and national identity have been influenced by both its Scandinavian and Russian neighbours. Once aligned with the USSR, Finland is now a member of the EU.

Geography: South and center are flat, with low hills and many lakes. Uplands and low mountains in the north. 60% of the land area is forested.

People and Society: One in four of the population lives in the Greater Helsinki region. Swedish-speakers live mainly in the Åland Islands in the southwest. The Sámi (Lapps) lead a semi-nomadic existence inside the Arctic Circle. Women make up 48% of the labour force, continuing a long tradition of equality between the sexes. Families tend to be close-knit, though marriage is becoming less common.