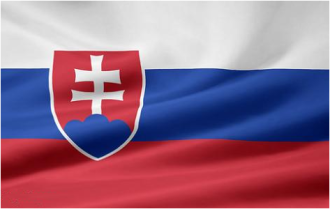 The Slovakian flag contains three horizontal bands coloured white, blue and red along with the nations seal.  The Slovakia flag colours resemble the flags of other Slavic nations.  The flag had been used since 1848 during the Revolutions of 1848 in the Habsburg areas.  The flag wag was adopted on March 1, 1990 as the flag of Czechoslovakia and the seal was added on September 3, 1992.  The coat of arms if Slovakia contains a double cross and three hills.  The cross represents the Christian religion of the country.  The hill tops symbolize the three mountain ranges which are the Tatras, the Fatras and the Matras.