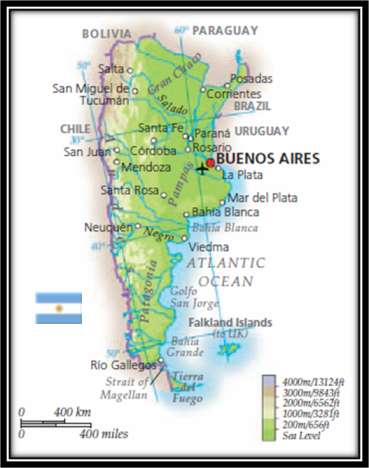 Argentina occupies most of southern South America. After 30 years of intermittent military rule, democracy returned in 1983. Economy has slowed since its recovery from 2001 crash.

Geography: The Andes form a natural border with Chile in the west. East are the heavily wooded plains (Gran Chaco) and treeless but fertile Pampas plains. Bleak and arid  Patagonia in the south.

Climate: The Andes are semiarid in the north and snowy in the south. Pampas have a mild climate with summer rains.

People and Society: People are largely of European descent; over one-third are of Italian origin. Indigenous peoples are now in a minority, living mainly in Andean regions or in the Gran Chaco. The middle classes were worst hit by the economic meltdown of 2001–2002.

The Economy: Agricultural exports restored growth from 2003, but bad drought in 2008 coincided with global downturn.

Insight: The Tango originated in the poorer quarters of Buenos Aires at the end of the 19th century