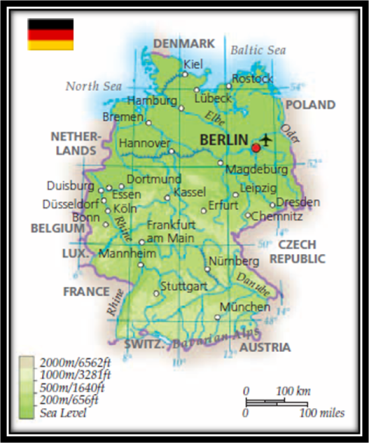 Europe’s strongest industrial power and its most populous nation, Germany was divided after military defeat in 1945 into a free-market west and a communist east, but reunified in 1990.

Geography: Central European coastal plains in the north, rising to rolling hills of central region and Alps in far south.

People and Society: Regionalism is strong. The north is mainly Protestant, while the south is staunchly Roman Catholic. Social and economic differences still exist between east and west. Turks are the largest single ethnic minority; many came as guest workers in the 1950s–1970s. Immigration rules now favor skilled workers. Feminism is strong.

The Economy: Major exporter of electronics, heavy engineering, chemicals, and cars. Worst recession for 60 years in 2008–2009. Aging population. ­Germany’s rivers and canals carry as much freight as its busy highways