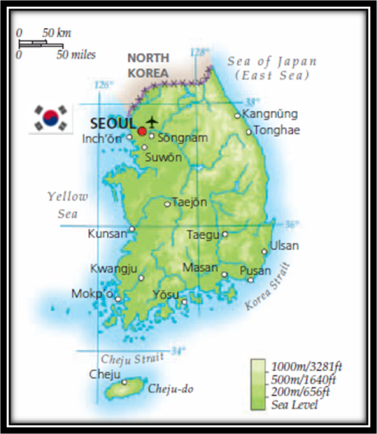 South Korea occupies the southern half of the Korean peninsula. Under US sponsorship, it was separated from the communist North in 1948 and is now a capitalist economy.

Geography: Over 80% is mountainous and two-thirds is forested. The flattest and most populous parts lie along the west coast and in the extreme south.

Climate: There are four distinct seasons. Winters are dry, and bitterly cold. Summers are hot and humid.

People and Society: Inhabited for the last 2000 years by a single ethnic group. The nuclear family is replacing traditional extended households. Since the 1953 armistice, the Koreas have remained technically at war. Reunification is the ultimate goal, but in 2009 the South became less conciliatory and the North retaliated by ending its offer of cooperation.

Insight: Half of all Koreans are named Kim, Lee, Park, or Choi