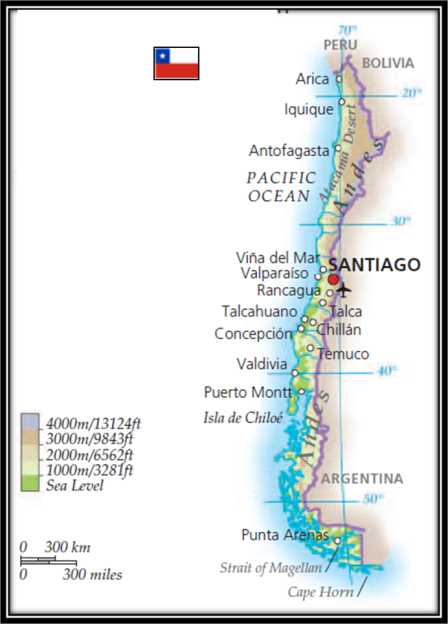 Chile extends in a ribbon down the west coast of South America. It returned to elected civilian rule in 1989 after a referendum forced out military dictator General Pinochet.

Geography: Fertile valleys in the center between the coast and the Andes. Atacama Desert in north. Deep-sea channels, lakes, and fjords in south.

Climate: Arid in the north. Hot, dry summers and mild winters in the center. Higher Andean peaks have glaciers and year-round snow. Very wet and stormy in the south.

People and Society: Most people are of mixed Spanish–Amerindian descent, and are highly urbanized. Almost a third of the population live in Santiago, many in large slums. There are three main indigenous groups, including the Rapa Nui of Easter Island. General Pinochet’s dictatorship was brutally repressive, but the business and middle classes prospered

Insight: Chile’s Atacama Desert is the driest place on Earth

Religions: Roman Catholic 80%, other and nonreligious 20%