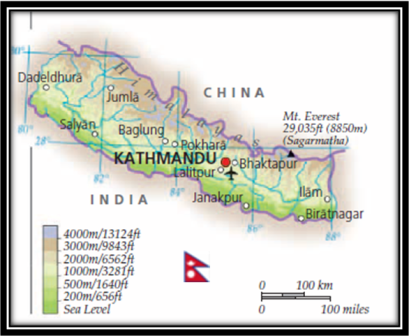 Nepal, lying between India and China on the southern shoulder of the Himalayas, is one of the world’s poorest countries. Its agricultural economy is heavily dependent on the monsoon.

Geography: Mainly mountainous. The area includes some of the highest mountains in the world, including Mount Everest. Flat, fertile river plains form the south.

Climate: Warm monsoon season from July to October. The rest of the year is dry, sunny, and mild. Winter temperatures in the Himalayas average 14°F (–10°C).

People and Society: Tensions are few between the diverse ethnic groups. Buddhist women, including Sherpas, face fewer social restrictions than Hindus. Trafficking of women and child labor are problems. Human rights violations rose during the 1999–2006 Maoist insurgency. The peace deal led to the abolition of the monarchy and Maoist victory in elections, but fractious coalitions mean instability continues.

The Economy: Agriculture employs 70% of people. Crops include rice and wheat. Tourism and investment affected by instability and Maoist insurgency. Reliant on aid. Hydropower potential.

Insight: Southern Nepal was the birthplace of Buddha (Prince Siddhartha Gautama) in 563 BCE