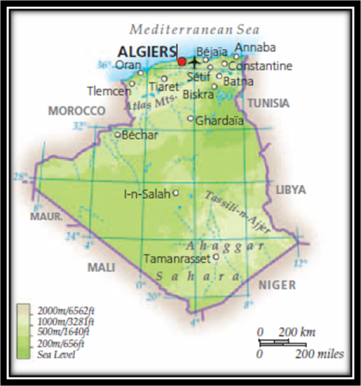 Africa’s second-largest country, Algeria won independence from France in 1962. Today, national reconciliation is key to recovery from a conflict launched by Islamic extremists in  1992.

Geography: 85% of the country lies within the Sahara Desert. Fertile coastal region with plains and hills rises from the southeast to the Atlas Mountains.

Climate: Coastal areas are warm and temperate, with most rainfall during the mild winters. The south is very hot, with negligible rainfall.

People and Society: Algerians are predominantly Arab, under 30 years of age, and urban. Most indigenous Berbers consider the mountainous Kabylia region in the north-east to be their homeland. They have been granted greater ethnic rights in recent years. The Sahara sustains just 500,000 people, mainly oil workers and Tuareg nomads with goat and camel herds, who move between the irrigated oases.

Insight: The world’s highest dunes are located in the deserts of east central Algeria