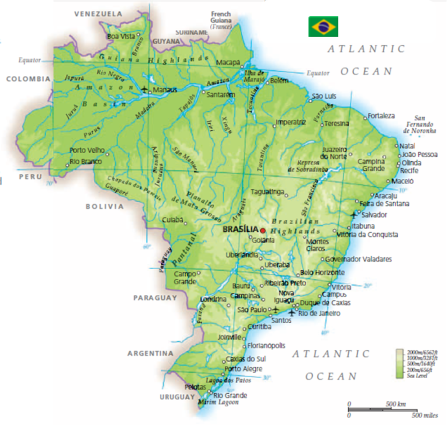 Covering almost half of South America, Brazil is the site of the world’s largest and ecologically most important rain- forest. The country has immense natural and economic resources.

Geography: Rain-forest grows around the massive Amazon River and its delta, covering almost half of Brazil’s total land area. Apart from the basin of the River Plate to the south, the rest of the country consists of high lands. The mountainous east is part-forested and part-desert. The coastal plain in the southeast has swampy areas. The Atlantic coastline is 1240 miles (2000 km) long.

Climate: Brazil’s share of the Amazon Basin has a model tropical equatorial climate, with high temperatures and rainfall all year round. The Brazilian plateau has far greater seasonal variation. The dry northeast suffers frequent droughts, though coastal regions are occasionally flooded by bouts of torrential rain. The south has hot summers and cool winters.

Insight: Since 1900, a third of Brazil’s indigenous Amerindian groups have become extinct due to disease, starvation, or the forceful taking of land by miners, loggers, and settlers