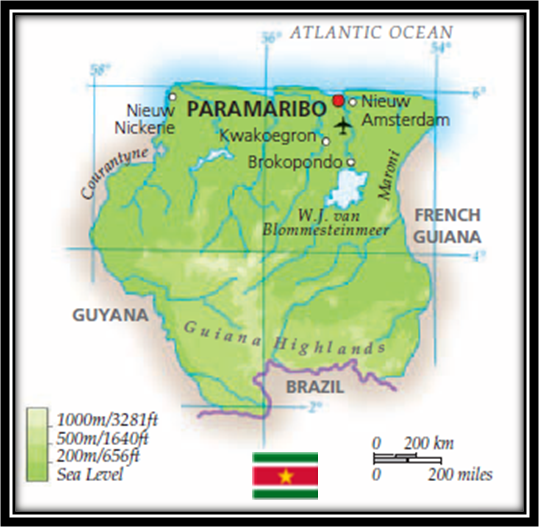 Suriname is a former Dutch colony on the north coast of South America. Democracy was restored in 1991, after almost 11 years of military rule. The Netherlands is still the main supplier of aid.

Climate: Tropical. Hot and humid, but cooled by trade winds. High rainfall, especially in the interior.

People and Society: The Dutch brought labourers from South Asia and Java. Independence saw mass emigration: over 300,000 Surinamese live in the Netherlands. Of those left, over 85% live near the coast, the rest in scattered rainforest communities. Indigenous Amerindians only number a few thousand. Bosnegers – descended from runaway African slaves – fought the military government in the late 1980s. Under civilian rule, each group has had a political party representing its interests.

The Economy: Alumina and gold are the key exports. Rice and bananas are main cash crops. Oil production and tourism are growing. Excessive bureaucracy.