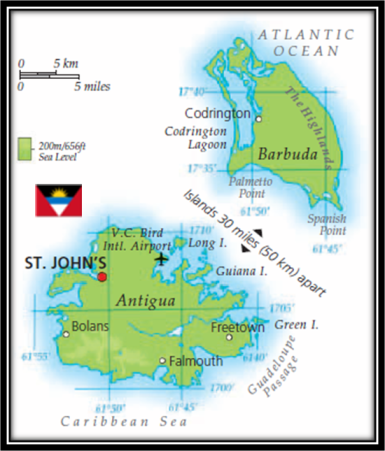 A former colony of Spain, France, and the UK, Antigua and Barbuda lies at the outer edge of the Leeward Islands group in the Caribbean, and includes the uninhabited islet of Redonda.

Geography: Mainly low-lying limestone and coral islands with some higher volcanic areas. Antigua’s coast is indented with bays and harbors.

Climate: Tropical, moderated by trade winds and sea breezes. Humidity and rainfall are low for the region.

People and Society: Population almost entirely of African origin, with small communities of Europeans and South Asians. Women’s status has risen as a result of greater access to education. Wealth disparities are small. The Bird family dominated politics from 1960, but lost power to the United Progressive Party (UPP) from 2004.

The Economy: Tourism is the main source of revenue and the biggest provider of jobs. Financial services and Internet gambling are expanding. High debt.

Insight: In 1865, Redonda was “claimed” by an eccentric Englishman as a kingdom for his son