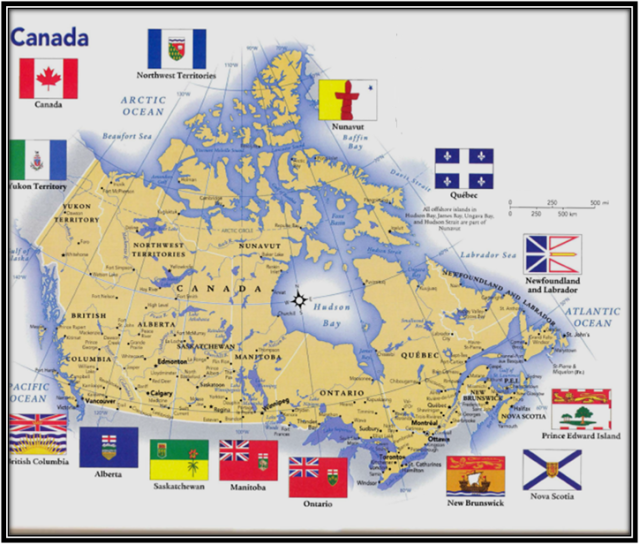 Canada extends from the Arctic to its US border along the 49th parallel. Unified under British rule from 1763, its development and expansion attracted large-scale immigration.

Geography: The world’s second-largest country, stretching north to Cape Colombia on Ellesmere Island, south to Lake Erie, and across five time zones from the Pacific seaboard to Newfoundland. Arctic tundra and islands in the far north give way southward to forests, interspersed with lakes and rivers, and then the vast Canadian Shield, which covers over half the area of Canada. Rocky Mountains in west, beyond which are the Coast Mountains, islands, and fjords. Fertile lowlands in the east.

Climate: Ranges from polar and sub-polar in the north, to continental in the south. Winters in the interior are colder and longer than on the coast, with temperatures well below freezing and deep snow; summers are hotter. Pacific coast has the mildest winters.

People and Society: Two-thirds of the population live in the Great Lakes–St. Lawrence lowlands, fostering some shared cultural values with the neighbouring US. Important differences, however, include wider welfare provision and Commonwealth membership. The French-speaking Québécois wish to preserve their culture and language from further Anglicization, and demand to be recognized as a “distinct society.” The government welcomes ethnic diversity among immigrants, promoting a policy that encourages each group to maintain its own culture. Land claims made by the indigenous peoples are being redressed. Nunavut, an Inuit-governed territory that covers nearly a quarter of Canada’s land area, was created from a portion of the Northwest Territories in 1999. Women are well represented at most levels of business and government.