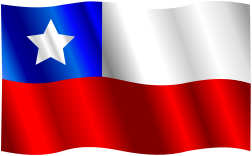 Few records remain of the original design, the most valuable being that of the flag used in the Declaration of Independence, which had a width of two meters and a length just over two feet. The flag was protected by various hereditary institutions until it was stolen in 1980 by members of the Revolutionary Left Movement as a protest against the military dictatorship. This group kept the specimen and returned it in late 2003 to the National Historical Museum, where it can be found today.