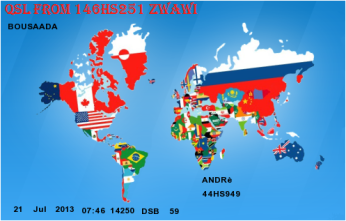 The Algeria flag has three colours, which are red, green and white.  The flag of Algeria has two vertical bars are in the colours green and white.  The middle of the flag has a red crescent and a red star.  The green colour represents nature.  The white colour represents peace.  The red colours represent the blood of those who have been killed while fighting for independence during the Algerian War.  The Algerian War lasted from 1954 until 1962.  The star and crescent are symbols of Islam.  The flag was adopted on July 3, 1962.