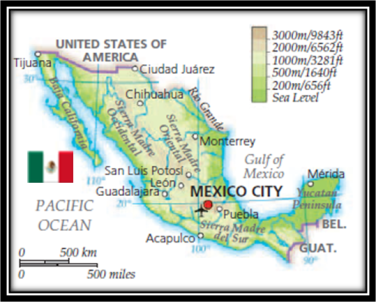 Mexico stretches from the US border southward into the ancient Aztec and Mayan  heartlands. Independence from Spain came in 1836. One in five Mexicans lives in the sprawling capital.

Geography: Coastal plains along the Pacific and Atlantic seaboards rise to a high arid central plateau. To the east and west are the Sierra Madre mountain ranges. Limestone lowlands form the projecting Yucatan peninsula.

Climate: The plateau and high mountains are warm for much of the year. Pacific coast is tropical: storms occur mostly March–December. Northwest is dry.

People and Society: Most Mexicans are mestizos of Spanish–Amerindian descent. Rural Amerindians are largely segregated from Hispanic society and most live in poverty, though the state promotes their culture. The Zapatista movement backs indigenous rights. Few women in male dominated politics and business. Narcotics-related violent crime is rising.

Insight: More people cross the US–Mexican border each year –illegally or legally – than any other border in the world